"He makes the clouds his chariot and rides on the wings of the wind." — Psalm 104

Those of you who have top flight memories and really pay attention may remember something that I said in a sermon about a month and a half ago. Right after we finished with the special readings for the holidays, I told you that we would spend a lot of time in Mark this year. I told you that Mark was a disciple of Peter and that we could say that the Gospel according to Mark could be called the Gospel according to Peter as written down by Mark. I told you how much Mark loves the word immediately. I also told you that no human being in Mark properly identifies Jesus until Jesus died. It is then that the centurion confessed that Jesus was the Son of God.

At first glance, today’s Gospel might seem to disagree with that idea. When [Jesus] asked [the disciples], “But who do you say that I am?” Peter answered him, “You are the Christ.” At first glance, it seems as though Peter has it right. Surely, we all believe that Jesus is the Christ, don’t we?

When Paul wrote to the Corinthians he said, [1 Corinthians 2:2] “I decided to know nothing among you except Jesus Christ and him crucified.” Paul understood that he needed to clarify the meaning of the title … Christ. He needed to make it clear that Christ and crucified go together. Why is this so important?

Well, let’s return to Peter. After Peter made this really awesome confession, he demonstrated that he had no idea about the true meaning of his own words. [Jesus] began to teach them that the Son of Man must suffer many things and be rejected by the elders and the chief priests and the scribes and be killed, and after three days rise again. And he said this plainly. And Peter took him aside and began to rebuke him. Let’s stop right there. Peter – disciple … Jesus – Master … Peter began to rebuke Jesus. Jesus began to teach His disciples the exact meaning of the title … Christ, and Peter started to scold Jesus!

On the contrary, this reading is also a warning to us. We too, have a tendency to avoid the cross. We love the charm of Christmas – the baby in the manger, the angels, and so forth, but we often forget that the Son of God became a human baby so that He could grow up to die on a cross. We love the miracles – curing a sickness, driving out demons, raising the dead, and all the other things that Jesus did, but we forget that these miracles are only signs to show us that the person who died on the cross is both God and man.

It is hard to deal with the cross of Jesus Christ. After all, the cross is an instrument of torture and execution. Rome used the cross as an instrument of deterrence. It was Rome’s way of saying, “Look at this poor guy on this cross. You really don’t want to do whatever it is that this guy did.” Our modern society often finds the cross to be offensive. It is gruesome. It is ‘R’ rated for violence. It is hard to contemplate in its shame and cruelty. Many will try to bury the cross’s message. Jesus loves these people too much to let them get away with it. Today’s Gospel speaks to those who wish to hide the cross and says, “Get behind me, Satan! For you are not setting your mind on the things of God, but on the things of man.”

As I said earlier, the Holy Spirit inspired St. Paul to write, [1 Corinthians 2:2] “For I decided to know nothing among you except Jesus Christ and him crucified.” Never the less, some will ask, “Can’t a message be a Christian message and not talk about the cross?” To these people Jesus says, “Get behind me, Satan!”

[Matthew 19:14] Jesus said, “Let the little children come to me and do not hinder them, for to such belongs the kingdom of heaven.” Never the less, some ask, “Do we have to remind the children of that ugly, old cross every Sunday?” To these people Jesus says, “Get behind me, Satan!”

Instead, He continued to teach them. He continued to prepare them. When the time was right – when the disciples had lived through the experience of knowing their master was dead on a cross, Jesus rose from the dead, appeared to them and [Luke 24:45-46] opened their minds to understand the Scriptures, and said to them, “Thus it is written, that the Christ should suffer and on the third day rise from the dead, and that repentance and forgiveness of sins should be proclaimed in his name to all nations, beginning from Jerusalem. You are witnesses of these things.” He restored them to Himself.

We will receive all these things through the Holy Spirit’s gift of faith in Him. Through that same faith we will follow Him through death into the resurrection of everlasting life.
Jesus has promised that life in this world will be hard for those who follow Him. Their confession of faith will bring them shame in this world. It may mean that they will lose their standing in this world. It may mean that the people they love will hate them. It may even bring them to death. Yet He has promised, “Whoever loses his life for my sake and the sake of the gospel will save it.” Those who have the Holy Spirit’s gift of faith in Jesus Christ may lose everything in this world, but in the end, God will give them eternal life. Amen

Sermon for the Third Sunday of Advent 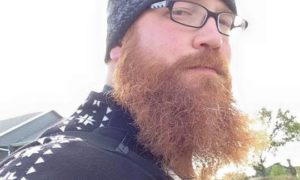